When in doubt, do something.

Singer-songwriter-philanthropist Harry Chapin believed every person could make a difference in the world. Even small acts of kindness add up to make the world a better place.

The Harry Chapin Memorial Fund was created in 1981 with help from Harry’s former manager Ken Kragen and Kenny Rogers who donated $150,000 from a benefit concert. Elektra, Harry’s record label, also was a major donor in the beginning.

Harry’s widow Sandy Chapin has led the organization from the beginning. While the name was changed to the Harry Chapin Foundation, its mission has stayed the same – to help make a positive difference in communities around the country. 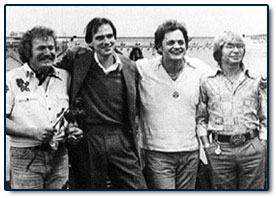 Gordon Lightfoot, James Taylor, Harry Chapin and John Denver formed the Food Policy Center which monitored the President’s Commission on World Hunger of which Harry was a member.  This is one of many efforts Harry supported during his lifetime.